In 2012 the MMO-game Saga opened up for users, offering a game spanning 250 years of viking age in a free, simpel online multiplayer game. I had the role of Game Director on this production, while I worked at Danish Broadcasting Corporation, which was a great challenge. With a team of five to research, program, create the graphics and design the game mechanics and game economy, it was a sometimes colossal task to create such a game on a budget of 500.000 Euro. A few enthusiastic interns and student helpers made a great contribution to the research, texts and translation of the game. Saga is historically correct and contains a huge amount of historical knowledge and factual anecdotes, although it is first and foremost an interesting and entertaining game. 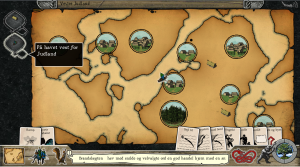 We made a short video (below) illustrating the games many facets and how the world, map and cultures change throughout the game:

Saga lets the players explore Europe, including Iceland, Greenland and the Atlantic islands, while trading, raiding and building his viking family and stronghold. Through trading, sailing and fighting, the family aquires honor and the resources necessary to expand their farm and man the largest ships. Players will encounter several cultures to trade or fight, including ghosts, dwarven master traders, giants or even a dragon, should they risk an adventure in the darkest woods of the most remote regions. While creating Saga, a governing principle for whether something should be part of the game, was that if we know the vikings believed in such a thing (ghosts, giant) or if it is regarded as a historical fact, both should be included in the game as ‘real’. If it was real for the vikings of scandinavia, it will be real in the game, which is why trading with arab tradesmen, performing old norse magic, recieving aid from the gods and selling chickens to a Wendish merchant are all realistic options in the game. Saga offers some deep insights into factual viking age history, but giants are still a danger to be reckoned with, when hunting in remote areas.

More about the game’s cultures, items, gods and other aspects of the game in this brief illustrated introduction to Saga