Interesting productions I have been part of or directed 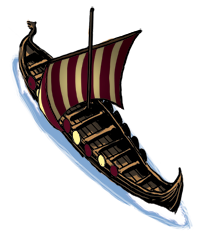 On a relatively (to the task) small budget, we hammered out an MMO-game, where players play through the 250 years of the Viking Age. Build a stronghold, attract strong men and women and become a notorious family. The MMO has some radical designs, compared to others, in the sense that it ends and restarts once per month, a player can win on one or more top-lists and it draws heavily on a board game metaphor. It is also, as far as I have been able to research the matter, the largest public service game ever produced. A casual learning game, it tells factual history non-intrusively and is a good gaming experience with many layers of historical information available, should the player come across something that piques his interests.
Details, videos and screenshots here

Chatworld where the users are represented as dogs, sniffing each other, laying turds with messages, digging up bones, buying and swapping hats to wear, throwing snowballs, disguising as cats… It is a strange and fascinating world. Pixelstyle and very original concept, it was a pleasure to re-design and gamify Hundeparken. Hundeparken included several mini-games which we remade or re-designed and also added a few new ones.
Details and screenshots here

Platform game for the TV-series H.A.S.H. (produced – not released)

A platformer where you shoot, jump and play with the physics engine, inspired by the old Rick Dangerous games and the Metal Slug series. We finished the game, including an easy to use level editor and 5 story-missions, but the TV-series was cancelled right before launch and thus the game was never published. The game was a quite good genre-game, but no one else got to play it. 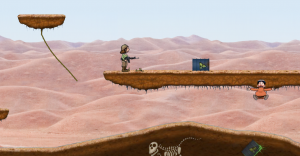 In 2001 I wrote and designed a method for interactive group-storytelling. A simple method and an assortment of cards guide and support the participants in cooperatively creating a fairytale as they are telling it. For schools and entertainment. Illustrated by Palle Schmidt

The first big learning game I was part of creating. I was part of the central group of five people, who designed, directed and produced the game, and I was mainly responsible for story design and chronology of tasks and story. In Homicide the students play 4 teams of criminal investigators with each their own murder case to solve in the small town of Melved. Tasks are realistic forensic and analytical tasks, that can be solved utilising methods and knowledge from biology, physics, literary analysis, math and other school subjects. Published in 2004 and still being bought and used by schools. 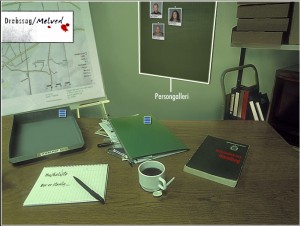 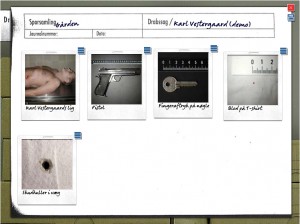 In this learning game the students play as competing companies, who specialise in energy-saving renovation and improvement. The company that does the best job of building energy-saving improvements on the students’ school, will win the right to rebuild all schools in the region. All improvements and their effect were developed in cooperation with specialist engineers, to create a realistic game and also with the intention of spreading knowledge of the most effective energy improvements for schools and homes. A simple game, technically, that supported a more complex, competitive roleplaying game, where cheating was used as a creative force and all tasks made realistic use of the skills and knowledge from math, physics, etc., that students often have a hard time seeing the use for.

A competitive debate game, where high school students are tasked with promoting a viewpoint in a debate, better than the opposing/alternative viewpoint from an opposing group. To win, they need to master the three parts of a good argument and to research for good support in an extensive library of materials. As with the other learning games, the students were surprisingly industrious and really got into both the role of supporting an argument that may not be their personal view and the fight for victory. The winner of the two teams in one debate was selected by the teams of a parallel debate, making the students both perform and evaluate each other professionally.

A small browser widget that evaluated how students search and with easy access to methods for more precise www-searching. By evaluating searches on a range of scales and giving graphical feedback, much like in a game, the Netpilot attempted to visualise the options available when searching the web and thereby help students improve their searching skills.

I have also had the pleasure of being part of some unusual productions.

I think this was my first job, actually. PriceWaterhouseCoopers wanted a something special to promote themselves at job fairs, in order to grab the attention of the best, new graduates. The company I worked at (Sjuzet) suggested a fiction and I got the job of writing it with Christian Fonnesbech as editor. PwC used it for years and I heard that 95% of the students who approached them for job openings, were familiar with Max K. Hart and his elite crew. To find the ‘hidden adventure’ in consulting and accounting and bring it to live, action-packed, with job- and educational facts and over just 4 pages was a great challenge. I believe I am still the only one who knows who all the main characters are named after.

Split – A DVD that created an interactive song and dance adventure

As a freelancer I got the task of creating a concept for 3-5 year olds, where song and dance not only educated them on safe traffic behaviour, but was also an interactive fiction or game. I love a strange and tough challenge like that, but never imagined ending up with a DVD programmed to let any DVD-player create branching tree adventures of song and dance. This was before iPads and other tablets.