Hundeparken (The Dog Park) was originally created by Danish Broadcasting Corporations Youth Department and opened in 2003. In 2007 I became the project manager of a redesign of The Dog Park, which would rebuild it from the ground up and breathe new life into the park and community by introducing new functionality and game elements.

Dogs, graphics and a lot of text material essential to the concept and the users was transferred, but everything else (server, client, gamification elements, new functionality, etc.) ?was done by our little team of 4 from December 2007, through the silent opening in late 2008 and finalized during the launch-period in Q1 and Q2 of 2009.

In the months leading up to the opening we ran an Alternate Reality Game (if that is the correct term for a fictional end-of-the-world rpg in a fiction, pixel dog park-reality), where the old dog world experienced natural disasters and chaos. Moderators and users played the roles of Dog Park personalities like an engineer battling floodings and lava, a scientist trying to explain it all and lead the dogs to escape in a spaceship, a religious leader calling for all dogs to repent and beg the dog god for salvation – and played all their followers and henchmen. This was done while we were creating the new world and the ARG culminated in a great escape from the old world, led by scientists, engineers and religious leaders in unison. The spaceship taking them to the new world was actually running on the new Dog Park and while they ‘travelled’, we built the future?areas of the chatworld Hundeparken.

The Dog Park is still open at?www.hundeparken.dk?and the trailer for the re-opening of The Dog Park is here (in danish, but I am sure you can follow the action):

Directing and re-designing the remake and gamification of The Dog Park is one of the most interesting and amusing tasks I have had the pleasure of solving. The Dog Park is a quirky, highly original and downright great concept for a chatworld. Dogs sniff eachother, their turds and puddles of pee to learn about eachother and so it is in The Dog Park, where a turd may hold a message and a puddle of pee is a reference to a dog you might visit the profile of or message. They dig in the Dog Park earth to find bones, hats to wear and mini-games. They participate in Dogginson, Dog Olympics and a range of other strange, userdriven activities. It is a strange and wonderful world of pixel-dogs. I did not create the original concept, but really enjoyed working on the remake and with the dedicated user group.

Today The Dog Park is run by a non-profit association. When DR, 4 years after the remake, decided to close The Dog Park as part of a new online strategy (less interaction, informative pages presenting broadcast programs, clear profile) I and a the lead programmer on The Dog Park aquired the IP in order to keep The Dog Park open for the users. We have never ourselves been ‘true users’ of the park, but we like the style, the humor and the users who make it worth the effort to keep the park open. 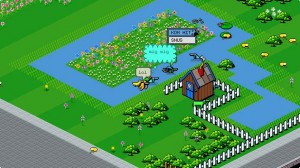 We have maybe 10.000 users and are in the process of establishing a new management of the park with?more user influence. We like to put in the necessary work in our spare time, which is not too much, since we did our work well and practically never have a breakdown or any significant bugs left.

The original concept and the graphic style was created by Danish Broadcasting Corporations Youth Department in 2002/3. S?ren Pors deserves the main portion of the credit for this strange and amusing world of dogs wearing hats. Below is a translation of the credit list we included in the Dog Park remake.

The first Dog Park, that started it all and won a nice Prix Italia in 2004, was created by:

Technical development and production was done by the small company Shockwaved – they later became Play and merged into TBWA/Play?